The Down Syndrome Consortium includes the following members:

Melissa Parisi, M.D., Ph.D., NICHD Intellectual and Developmental Disabilities Branch (IDDB) Chief, serves as the chair of the Consortium. Sujata Bardhan, Ph.D., a health scientist administrator with IDDB, is the executive secretary of the Consortium.

In early 2006, the NIH Director asked NICHD to lead the formation of a Down Syndrome Working Group that would include scientists from across NIH. The Working Group was charged with coordinating ongoing research already supported by NIH related to Down syndrome, and to enhance new, NIH-supported research efforts.

The Working Group, with input from the outside scientific and family communities and at the request of Congress, created the NIH Research Plan on Down Syndrome in 2007 to focus on genetic and neurobiological research relating to the cognitive dysfunction and progressive late-life dementia associated with the condition. The plan aimed to build upon ongoing NIH-supported research on Down syndrome, reflect the changing lives of the individuals and families affected, and take advantage of emerging scientific opportunities.

After several years of working with scientific and family communities to achieve the various goals of the plan, NIH created the Down Syndrome Consortium to foster communication and idea-sharing among NIH, individuals with Down syndrome and their families, national organizations interested in Down syndrome, and pediatric and other organizations.

In addition, NICHD supports and leads DS-Connect®: The Down Syndrome Registry to facilitate contacts and information sharing among families, individuals with Down syndrome, researchers, and advocacy groups. Consortium members are actively involved in outreach efforts to the Down syndrome community to encourage families to sign up for the registry. 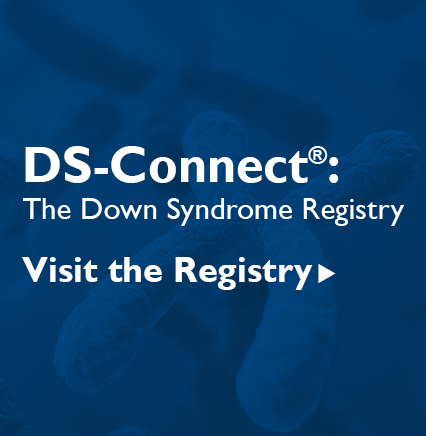