Welcome to the Down Syndrome Consortium

In 2011, the National Institutes of Health (NIH) joined with governmental and private organizations interested in Down syndrome to form the Down Syndrome Consortium. The goal of the Consortium, which is led by the Eunice Kennedy Shriver National Institute of Child Health and Human Development (NICHD), is to encourage the exchange of information about Down syndrome research and healthcare among Consortium members. 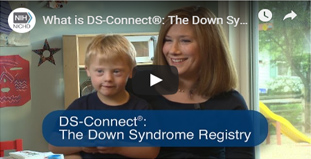 What is DS-Connect®: The Down Syndrome Registry? A transcript of the video is also available. Check out the NIH Research Plan on Down Syndrome (PDF 772 KB). 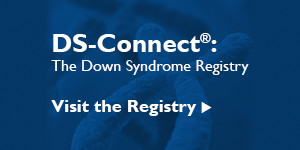 NICHD is pleased to be co-leading the INCLUDE (INvestigation of Co-occurring conditions across the Lifespan to Understand Down syndromE) project, an NIH-wide initiative that launched in June 2018 in support of a congressional directive. The project aims to understand critical health and quality-of-life needs for individuals with Down syndrome, with the aim of yielding scientific discoveries that will improve the health, well-being, and neurodevelopment of individuals with Down syndrome, as well as inform our thinking about common diseases they share with individuals who do not have Down syndrome. The INCLUDE project will investigate individuals’ risk and resilience for conditions that affect both people with Down syndrome and the general population, such as Alzheimer’s disease/dementia, autism, cataracts, celiac disease, congenital heart disease, and diabetes.

On the podcast episode “Research at NIH,”

Melissa Parisi, M.D., Ph.D., chief of NICHD’s Intellectual and Developmental Disabilities Branch, and Lisa Kaeser, J.D., director of NICHD’s Office of Legislation and Public Policy, discuss the DS-Connect® registry and the INCLUDE project with Dr. Kishore Vellody, director of the Down Syndrome Center of Western Pennsylvania. Dr. Parisi serves as the chair of the Consortium and Ms. Kaeser is the executive secretary.